We learned about virtual machines earlier, which will give you a decent foundation for containers.

The virtual machine approach is wonderful when you want to maintain strict separation between different operating systems. It dedicates storage, memory, and CPU to the VM, so that “power” is effectively taken from the host OS.

The guest OS (inside the VM) runs its own complete stack, from the kernel all the way up to the user interface components.

Let’s say you have a Linux computer, and you create a VM on it. On that VM you install another Linux. Now you have two kernels, two networking stacks, and possibly two desktop environments.

Sounds like a lot of overhead, yes? Especially if you only wanted to isolate a few things in the VM.

A container works differently. Where the VM needs a complete software stack to operate, the container relies on the host for all processing, execution, and memory management. It therefore can be stripped of all non-essential components. Plus, it doesn’t require any resources (CPU & Memory) to be completely dedicated to it. A container’s memory use may go up or down during its lifetime, but free resources are usable by the host OS instead of being tied up.

Containers are typically isolated from each other in the following ways:

A container will typically run a single main process, so it is therefore very lightweight. Running multiple VMs is heavy, but multiple containers is a breeze.

Of all the container solutions, Docker is the most well-known and popular. They maintain a huge repository of pre-built containers at Docker Hub which you can browse.

Open a terminal and install with apt:

Now check that the Docker service is running:

OK, the Docker container is running! Now let’s actually create a container and see how it works:

What happened? Docker was told to run a container with an image tagged “nginx”. It looked for a locally-stored copy of the container image but could not find it, so it downloaded it from hub.docker.com using the repository library/nginx. Then it executed startup inside the container and displayed all of the output to the terminal. The docker service also created a port mapping that will pass all traffic on port 80 outside the container to port 80 inside the container.

Now, open a browser (Ubuntu installed Firefox by default), and go to http://localhost. 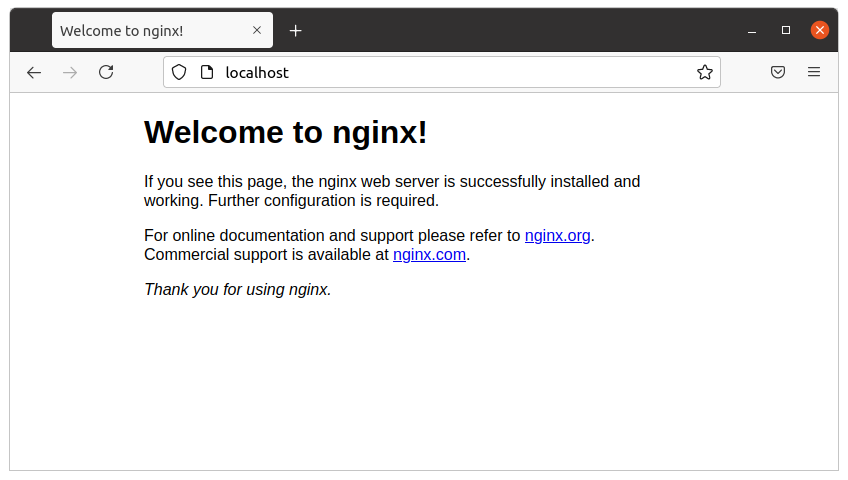 Wow, look at that! I have a web server (nginx), running inside a Docker container, serving a very basic webpage.

Attaching Files to a Container

In the case of the nginx Docker image, it comes with a default page that you see above. It is located inside the container at /usr/share/nginx/html. This is the first time I’ve mentioned files inside containers, so I’ll try to keep it simple. When a container is created, it is populated with files from the associated image. These files are laid out by the container’s creator, and are otherwise inaccessible from outside the container. However, in an effort to maintain flexibility, files and directories from outside (i.e. on the host) can be attached to the container and accessed like they were normally inside.

In this way, a generic container can be created and then attached to a directory with customized content that lives on the host.

For example, let’s say that I have a custom BowTiedDevil web page that I want to serve with a Docker container. We already have the container (nginx), which by default serves content in its /usr/share/nginx/html directory. If I attached my custom page to the container, it would serve it instead of the generic page above.

So here’s what I would do. First, create an index.html file with the following content using nano:

If you don’t know HTML, don’t worry about it. You can probably guess what the webpage might say just by reading the tags.

Then I run a new nginx Docker container with the following options:

With that done and the container running, refresh the page in Firefox. 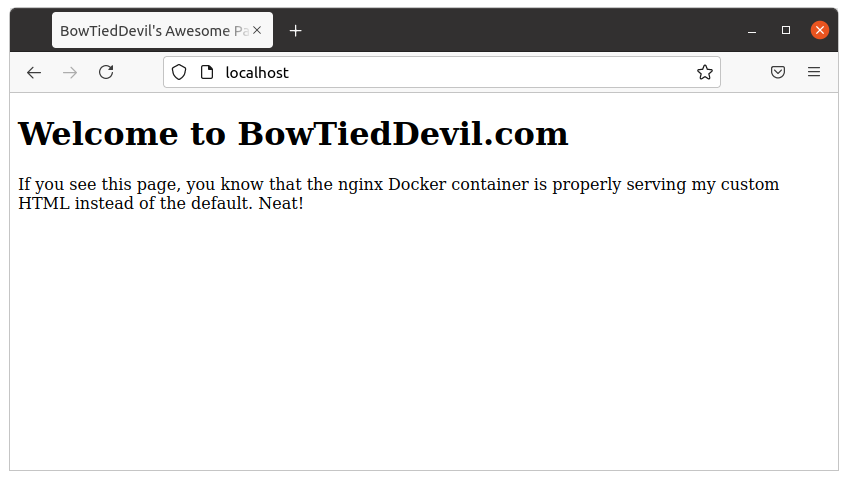 Stop the container with CTRL + c and remove index.html if you want.

I want to leave you with this key takeaway — Docker is a fantastic tool for creating and managing individual services that can be moved, modified, customized, and reconfigured at whim, without making modifications to your base OS. This means that you can stop caring about the base version of Linux that you’re installing (Ubuntu in our case), and concentrate on the containers running the services you care about.

The great trap of running a Linux server is that you begin to treat it like a pet, caring for it and customizing it and applying lots of little fixes here and there. If you’ve worked on it for a long time and need to upgrade, it can be very nerve-wracking. You likely have forgotten some small tweak you’ve made, and debugging a misconfigured service after an upgrade can leave you in a panic especially if that service is mission-critical.

Using Docker allows you to keep the services outside of the normal stream of distribution updates, giving you more flexibility.