In the last post, we spent a long time talking about containers and celebrated with a very simple nginx web server setup. In this one, we will delve into some intermediate topics and learn how to:

In the early days of web hosting, it was common to see the LAMP acronym, which represents Linux, Apache, MySQL, and PHP. These technologies enabled much of the Internet as we know it. They are still in heavy use today, though some newer technologies have taken market share away from each component. I’m not here to evangelize any part of the stack (except perhaps Linux).

Rather than a dry lecture on the above topics, we will learn them all by setting up perhaps the most well-known web application of all time: WordPress.

WordPress is the most popular blogging software of all time. If people don’t love it, they certainly use it. Most of you are interested in web hosting, and most of you will end up installing a WordPress blog.

So let’s build a WordPress stack using Docker, and learn a few things along the way.

In the previous post, I had you install docker-compose, which is a set of scripts to simplify creation, updating, starting and stopping of containers.

Check if you have it by running:

If you see that, you’re all set.

I suggest creating a dedicated sub-directory for your docker files. If you prefer working as a normal user, create the directory in ~/docker. Remember that ~ is shorthand for your user’s home directory (/home/[username]).

Create the new directory and move into it:

Now let’s take a break and navigate to the official WordPress repository on Docker Hub. You’ll see a lot of unfamiliar stuff there. The important items are the list of supported tags, and further down an example stack.yml file.

For now, let’s take the easy way out and simply copy the stack.yml from their repository. Copy the text above, open nano, then right-click to paste it. Use CTRL + x to save to stack.yml, then you’ll be back on the CLI.

Then you’ll see a lot of stuff happen in the console. Watch it for a while and you’ll eventually see a line similar to db_1 | Version: '5.7.34' socket: '/var/run/mysqld/mysqld.sock' port: 3306 MySQL Community Server (GPL)

Then open up a browser and visit http://localhost:8080. 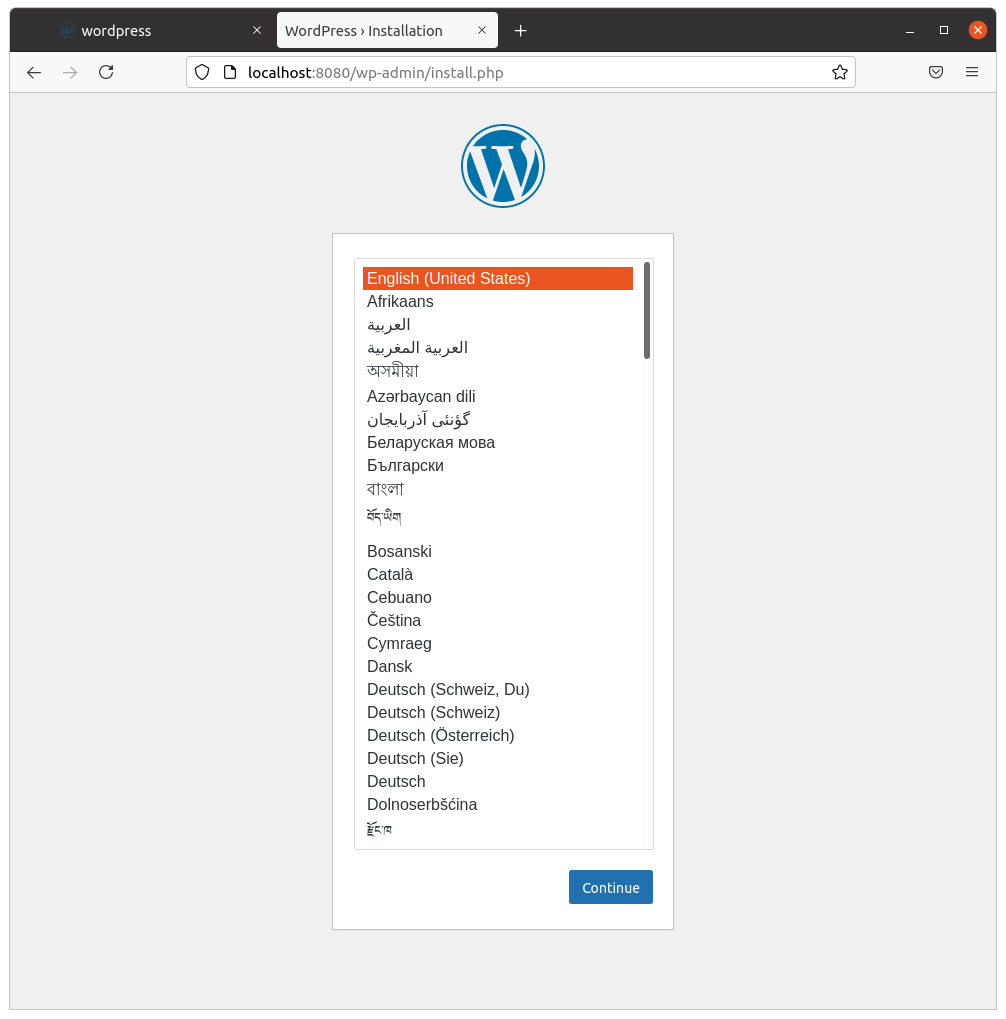 Wow, WordPress is ready to go!

Shit, that was easy. What have I been paying these hosting companies for, exactly?

Feel free to play around with the WordPress installer, and even build a little test site and explore the interface. When you’re done, kill the stack in the CLI with CTRL + c and it will clean up behind itself.

What Did We Learn?

Now let’s rewind a bit. Review the first paragraph where I said I would teach you how to do four things. I will review one by one.

Define containers with a text configuration file, instead of individually on the command line

That stack.yml file is the text configuration file I mentioned. The nice thing about defining containers with a file instead of one-by-one on the CLI (as shown in last post) is that they are guaranteed to start int he same way each time, without you having to remember the options.

These configuration files are portable, and they define everything you need about the container stack so they are inherently portable. Copy them to a new machine, start them up, and bang! WordPress on a new host.

The format for a docker-compose configuration file is pretty picky, since it’s defined in a markup language called YAML. You can read about YAML here, if you’re interested. White space and indentation are important in YAML, so be sure to use spaces and not tabs. If you copy-pasted my code above, you’ll be OK but be sure to use white space properly in the future.

A particular container is labeled under the services: section. Our WordPress stack has two parts, the wordpress container and the db container. Each have their own section with sub-options that define the following characteristics:

The environment section of the wordpress container defines several variables:

Similarly, the environment section of the db container defines several variables intended to create a mySQL database inside the container with a particular name, and a user/password to interact with it.

You can see how these two containers will connect together in this way. MySQL is created and waits for a connection, which WordPress soon makes using that pre-defined information.

We remember that containers are designed to be created, destroyed, and thrown away at a moment’s notice. However, we want some of that data to persist between containers. For all data like this, we use a volume and attach it to our containers. In this example, we define two volumes named db and wordpress.

The names aren’t important, but you should use something intuitive as you begin creating your own stacks.

This web application stack is made possible by the interaction of WordPress (a PHP application) and MySQL (a database). The two containers don’t know about each other and each have a single task. By themselves they do nothing, but when WordPress reaches out to the MySQL server using the db hostname… Magic!